While looking for certain images this morning, archives staff came across this fabulous photo of what is now Woods Memorial Hall in the 1886 Olla Podrida, just after it was built.  There would have been four Circle houses with it (out of frame, to the left) at that time — Cleve, Griswold, Dickinson and Woodhull — but not Kennedy, which was not built until 1889.  Other buildings constructed that first year include Foundation House and the Bath House.  Missing, as you can see from the photo, were Upper (built 1892) and the Edith Memorial Chapel (built 1895). Memorial Hall, the main classroom building of the day, was designed by Peabody & Stearns, a leading Gilded Age architectural firm from Boston. 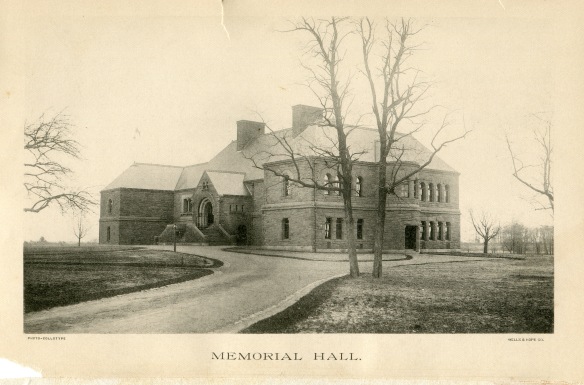 The Lawrenceville School and the Stephan Archives have reopened after being closed due to Hurricane/Superstorm Sandy for an entire week.  While the campus sustained some damage courtesy of wind and trees, the Archives and the Bunn Library in which is it is housed were spared any signficant issues. All collections “weathered the storm” without any problems, despite a four-day power outage, thanks to the cool autumn weather.  Thanks is owed to the School’s amazing Buildings & Grounds department, who were on campus and working hard to protect our facilities and community members both during and after the storm.  Without their invaluable assistance, things could have been much worse.